Formula Fusion is an anti-gravity combat racing game set in the year 2075. Work your way through the SinglePlayer Campaign, unlocking craft, tracks and your inner rage. Develop your racing and combat skills to climb the Leaderboards. Race against the world on-line in the 10 player Multiplayer W.A.R (World Anti-gravity Racing) Formula Fusion’s garage gives unprecedented craft customization for performance, weapon loadouts and skins.

Unlocking
From the start all craft are available to you. Tracks and variants are unlocked by progressing through the Campaign. If you want instant access to all tracks, variants, craft and speed classes you can find them in Multiplayer.

Garage / Tech Credits
Garage Cards are bought with Tech Credits gained through competing in Single and Multiplayer in any of the different modes (except for Time Trial) including Campaign.

Slots
The Garage shows Slots around the craft which offer upgrade Cards to change handling, performance, defensive and offensive weapons.

Weapons
Choose Energy Bolts, Gauss Cannon or Mines. Then pick 2 Weapon Behavior Cards. Try an Energy Bolt with a double Spread or an extra Guidance Card. For shorter range a Gauss Cannon with Guidance and Armor Penetration might suit you better. Experiment and find what works best for you. Everyone has their favorite load-outs. We have tried hard to balance the choices to ensure there’s no one killer combination. Skill and judgement are what counts in Formula Fusion.

All weapons come fitted with a small amount of Guidance by default.

SinglePlayer Campaign and Unlocks
The Campaign is centred around The Yangs team’s home circuits in the TransAmerican States. Starting the Campaign with the Vixen you unlock tracks, track variants and Skins as you go. All craft and upgrade Cards are available from start but you have to buy them by earning Tech Credits as you race. The higher you finish and more damage you inflict the more Credits you earn.

Multiplayer
Go to WAR online for 10 player multiplayer. If you’re hosting the Lobby you can choose any track or put the choice to a Vote. As Lobby Host you can specify what track variant Speed Class and race Mode you want *b

On-Line Community
We will support the on-line multiplayer community as much as possible with race meet times and tournaments. Expect a free DLC Tournament mode after launch. We will introduce real co-op Team racing which will really be able to take advantage of all the Garage customisations. We will be moving to a hosted server solution which among other things will offer in game chat and an ELO ranking system (assuming numbers warrant it) so everyone can the most out of their races.

paid DLC
Paid cosmetic DLC post launch. Skins and Craft mods to make you unique. Performance upgrades will always be fought for not bought for.

Craft are balanced to allow for different racing styles and track strategies. Speed is offset by weak defenses.

Speed Pads
Speed Pads give the craft a small increase in speed as you go over them. Positioning your craft to fly precisely between 2 Speed Pads results in an extra speed hike.

Boost
The BOOST function is a central game mechanic in Formula Fusion. BOOST points are collected as you race and can be seen in the HUD. The BOOST is activated (X on Controllers or E on Keyboard). On activation it drains the BOOST reserves and give the craft a huge surge in acceleration and top speed. Activation on a full BOOST gives an longer BOOST period for even higher speeds. Use BOOST wisely and it will win races. Waste it and you’ll end up in the wall.

Airbrakes
Although they might not at first to be useful, in the higher speed classes they become an essential part of gameplay in order to keep up with the pack.

Side shifting is possible at speed if you airbrake in the opposite direction to your turn. Counter intuitive and not easy to master but on the harder more technical tracks it’s a definite advantage to have this skill in your toolbox.

Future Plans
As mentioned, we plan to:
– issue some sizeable free track and craft DLC based around the other Team regions
– free game features including Tournament Mode allowing players to host events
– move to a hosted server solution to ensure absolute parity for all racers
– introduce voice chat within Multiplayer
– PS4 & XB0 ports. Other platforms (inc’ VR) and OS’s will be considered after that

GAME LORE
Game Setting
The game is set in and around New York State 50 years after the cataclysmic events of an all-out global nuclear war rendering many regions uninhabitable. Redevelopment on a vast scale has papered over many cracks with many districts almost unrecognisable. The division between rich and poor is the greatest it has ever been with Favela style slums with make-shift buildings forming poverty stricken rings around affluent commercial districts.

The year is 2075. 177 years since man first got behind the wheel of a car and raced against a competitor. Through the years, advances in science and technology have pushed the field of Quantum Levitation to a degree that allows modern transportation to be suspended within artificially created gravity fields above magnetic super-conducted highways. Along with transportation, this technology became embedded in motor sport racing; the pomp and celebration of what was Formula 1, evolved to become FORMULA FUSION – QUANTUM RACING LEAGUES.

The racing calendar is now established as a global sporting event that brings technology and science together like never before. Because of the high level of technical competition and the huge levels of investment the race attracts – the traditional corporate backed race teams have given way to huge University based research facilities. Each team is now represented on a national level by these huge schools of excellence. These Mega-Universities are often the size of large cities with their own economies and laws.

With competition for research funding high, each race season is as much about showcasing the skills of the pilots as it is the performance of the craft. Competition to attract the best researchers and engineers to these institutions is fierce with big money headhunting common place. Craft pilots are nurtured from birth and conditioned into becoming perfect testing machines to support this drive for success.

Universities regularly publish their standings in global research tables and this in turn allows them to achieve greater funding and expansion. Formula Fusion is a perfect testing grounds for the latest in hardware and science innovations. To support research surrounding the event, Universities have focused on 4 key areas of innovation:

Track Technology
Tracks are made up of magnetic superconductors that suspend the craft within a gravitational field using super-cells, cooled by liquid nitrogen. This Quantum Levitation effect allows the craft to skim along the track at incredibly high speeds whilst remaining suspended above the track surface. Magnetic side buffers create an invisible barrier to dampen impact at high speeds. 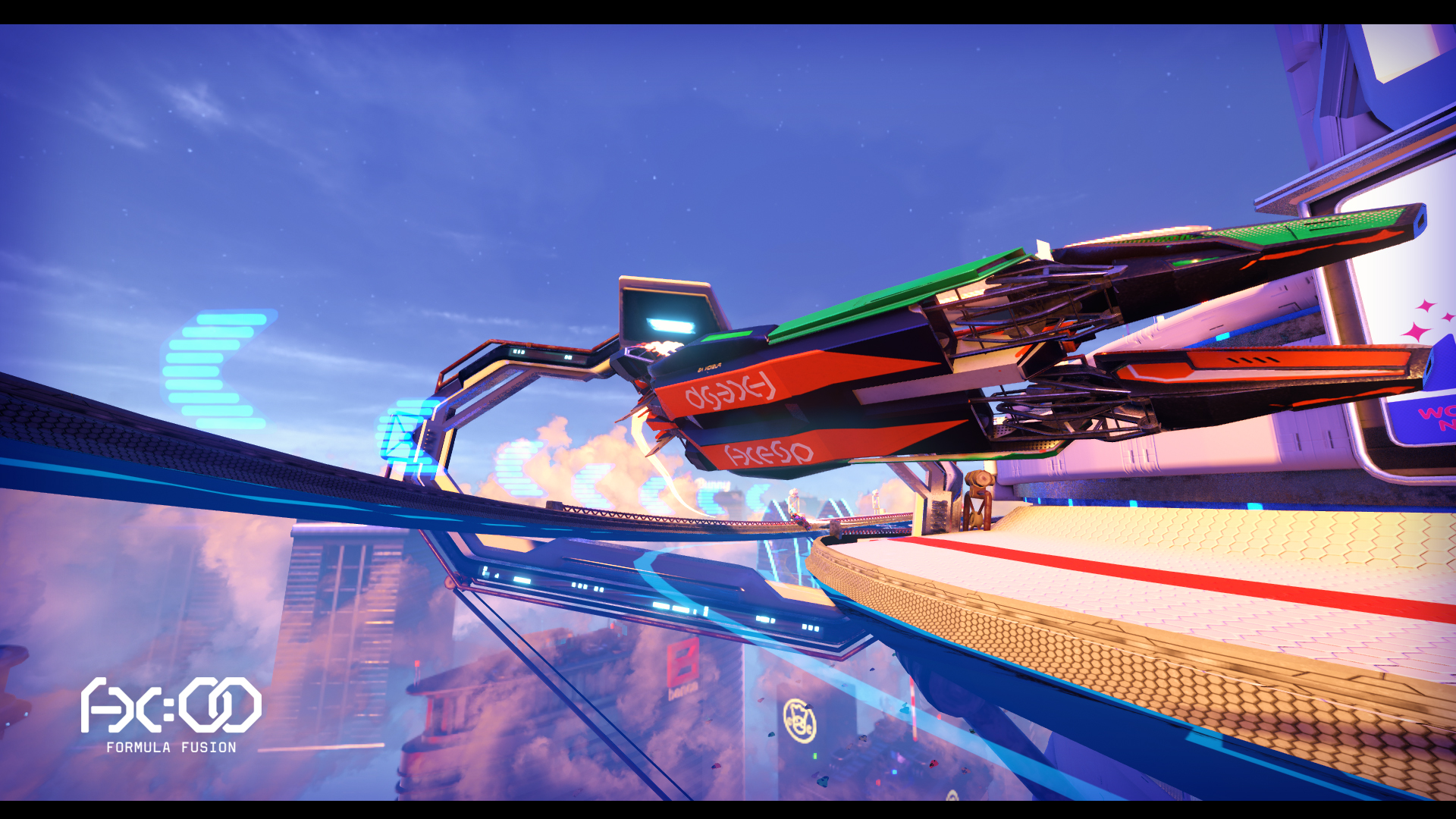 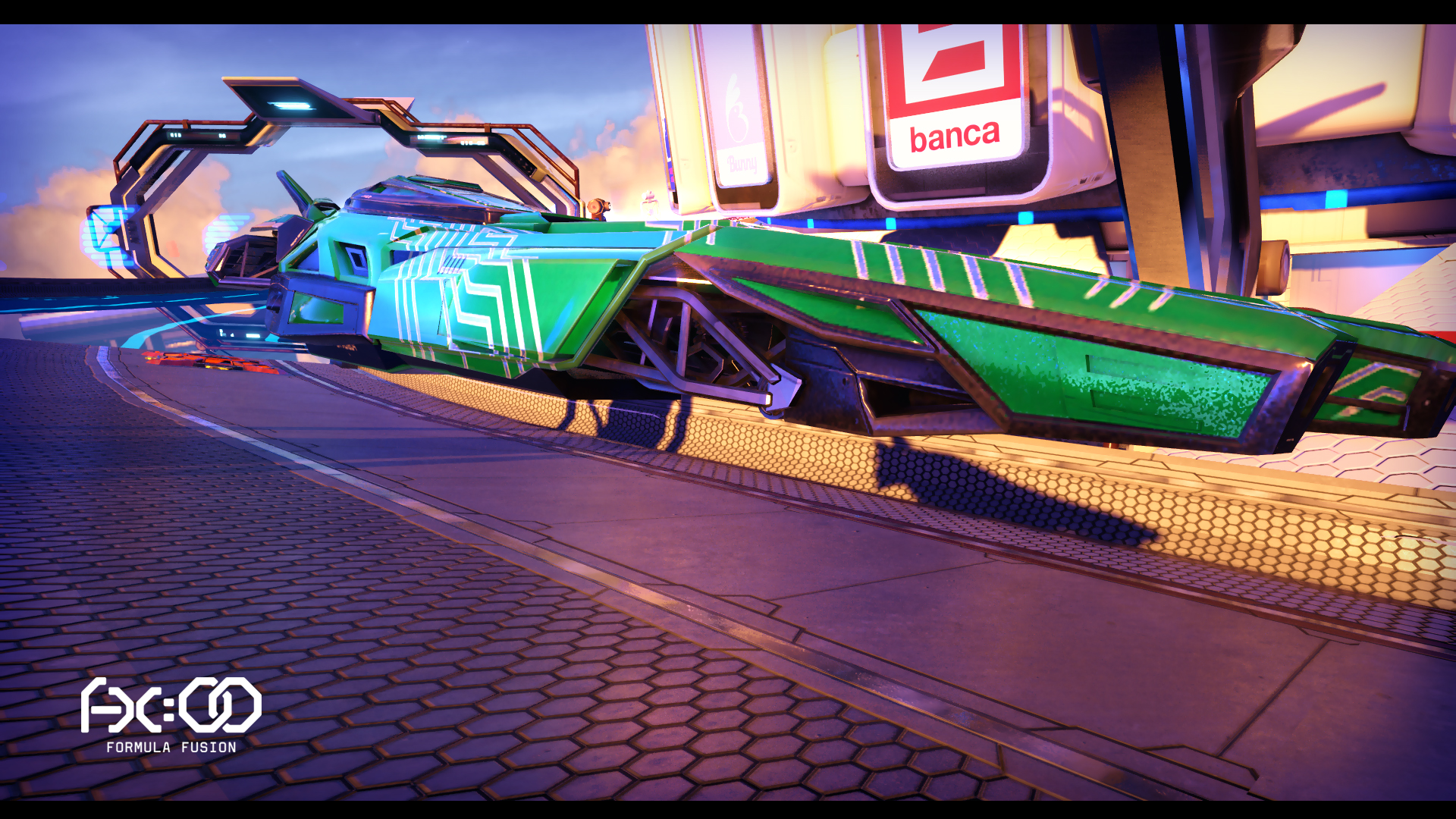 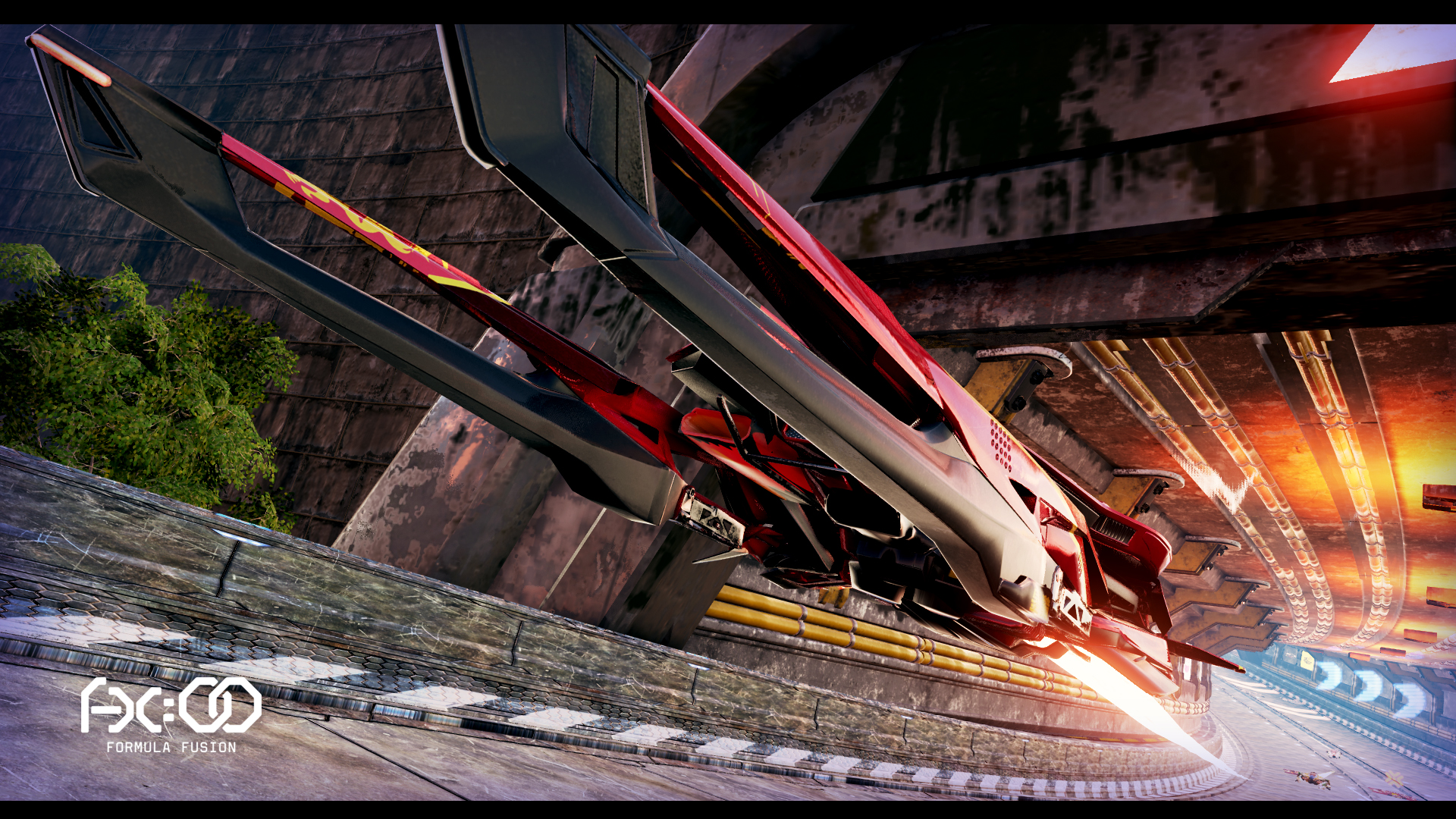