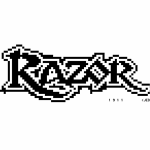 Razor 1911 (RZR) is a warez and demogroup founded in Norway, 1985. According to the US Justice Department, Razor 1911 is the oldest software cracking group that is still active on the internet.

The group was founded as Razor 2992 by Doctor No, Insane TTM and Sector9 in Norway in October 1985 as a Commodore 64 software cracking group. Shortly after, they changed from 2992 to 1911 which translates to 777 in hexadecimal.

Between 1987 and 1988 the group began to move away from the Commodore 64 and migrated to a new hardware platform, coding demos and cracking games for the Amiga. In the very early 1990s Razor 1911 made another transition, this time to the IBM PC, foremost as a cracking group, but still continuing to release cracktro loaders, demos and music.

Razor was a supply group on diskette from 1992 until diskettes were abandoned for CD-ROMs. Throughout the 1990s Razor faced competition from many different groups, ranging from groups such as Tristar & Red Sector inc. (TRSi), International Network of Crackers (INC), The Dream Team (TDT) and Fairlight (FLT) in 1994 to Prestige, Hybrid (HBD), and others in 1995. Razor was revitalised by new members gained from another group, Nexus, who brought with them some UK suppliers and the leaders The Speed Racer (TSR), Hot Tuna and The Gecko. Razor had a handful of others throughout the 1990s, such as Zodact, The Renegade Chemist (TRC), The WiTcH KiNG, Butcher, SwiTch, Marauder, and Randall Flagg.

In 1995 diskette releases were rapidly being supplanted by CD-ROMs, and Razor 1911 moved into the CD-ripping scene. The crew that led Razor into this new chapter included members such as TSR, Pharaoh, Fatal Error, GRIZZLY, Suspicious Image, Third Son, Hot Tuna, Beowulf, Pitbull, Bunter, Manhunter, Niteman, Vitas, Mausioso and The Punisher.

Razor once again took on a new challenge when the ISO scene was formed. Razor 1911 began to release ISOs when they became the standard of the day, led most significantly by The Punisher. He was instrumental in Razor’s recovery and its solid performance in the ISO scene. Following The Punisher’s retirement, Razor was led by various different people and underwent some internal problems in the form of leadership challenges. This was solved when Pitbull, an old Razor member from the 1990s, took over the leadership role. The FBI claimed him to still be the leader of Razor at the time when “Operation Buccaneer”, an international anti-piracy operation which led to raids at the homes of over 60 piracy suspects worldwide in 2001, was carried out even though NFOs and scene activity at the time points out The Renegade Chemist as actual leader of the group.