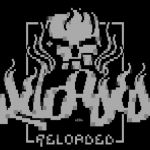 Many keygens made by Reloaded generate keys ending in XRLD, where the X stands for a number/letter.

Reloaded decided to release an old internal tool to the public when the Macrovision turned into Rovi Corporation and discontinued the development of SafeDisc and SafeCast DRMs. It can be used to bypass checks like CD/DVD validation, trial, online-activation (for beta games), execution-count and of silent CD/DVD checks.