Story Description:
Heroine Anthem ZERO 2: Scalescars Oath When the world was freed of chaos, the Twin Virgin Saints started the circle of the seven doomsday. When the lands were flooded on the sixth doomsday, after the descendants of the Savior received blessings from God, they resurrected under the new born Tree of Life Terasyr, establishing the royal city of Vuzahem. But ichthyopagion still continued to grow, making clear that the Gods have not forgiven the world. People must find answers to the meaning of war while surviving the sins and punishments before Judgement Day. The story includes multiple subtle metaphors for the relationship between God and humans.

The game revolves around Shama, the young descendent of Gon Arrue who survived ichthyopagion. Living under the Tree of Life and becoming a priestess, then leaving the Tree of Life on the eve of the Star Ark Festival, she traveled to the far west to Uzato, the town of the Forest Keepers. She goes looking for the benefactor her mother told her of in hopes of finding an ordinary and simple home, but the only clue her mother left was a pin. What has Shama been through? Keeping her tears and loneliness secret behind her smile, leaving the place she promised to look for. But will her fate truly bring her peace?

About the game:
Heroine Anthem ZERO 2 : Scalescars Oath is a real time 2D mixed with 3D side-scrolling story-based ARPG, simultaneously supporting controller and keyboard input. Unlock more skills by leveling your character.
The game’s producers have used their innovative creativity to bring you a long magical “duet”. The game combines legends of mermaids as well as Serbian and East Asian tribal culture to create its cultural world. Created over many years, it features nearly 400,000 words of dialogue, over 500 stories CG, 300 stages, and over 500 story performances. It has genuinely been brought to life a like a long TV series but as an adventure game. The soundtrack includes many songs from multiple music producers, which takes your experience to a whole new level!

[Don’t worry about feeling out of the loop if you haven’t played the previous ZERO 2, we’ll catch you up on previous events in-game. Please have fun!!]

1. Shama Kutami
Age 17 \ June 6th \ 156cm \ B90 W54 H83
A young girl descended from Gon Arrue, parted from her own mother by the age of 10. Having gone through slavery, stealing, acting, and wandering for quite some time, unfortunate things happen to people close to her. She has learned to not cry and to guard her secrets by being strange and weird. Accustomed to dressing like a young lad, with top notch lockpicking, singing, and cooking skills, she’s able to strike when needed. Being able to feast is her way of living. Along side Shama is Cuckoo, her best companion.

2. Wanin Sarem
Age 19 \ November 3rd \ 177cm
Descendant of one of the three largest families, the Uzato. Both parents died when he was young, and he grew up with younger sister Naire and Mormolia. Inherited his parents’ exquisite crafting and mechanical talent, finds peace in each time the hammer slams down in the workshop his parents left behind. Going deep into the Longhorn Forest to investigate crystals, he meets the long lost Evolous. Wanin and Mormolia both face a life-threatening encounter.

3. Mormolia
Age 19 \ March 27th \ 38cm
Nicknamed MoMo, grew up with BFF Wanin. Age is uncertain, but Wanin wasn’t born yet when he arrived at Sarem’s. Ever since, she has been an older sister figure and close with the Sarem family. Has a sweet elvish look but is tough on the inside — drinking and fighting is right up her alley.

4. Welly
Age 21 \ September 15th \ 183cm
A temple guard who often travels between Starry Mountain and East Mountain Trail. Good at using javelins. Enjoys time alone and looks like SACRED TEMPLE GUARD CAPTAIN Sigud, thus getting the nickname Twin Spirit. Is often deep in his own world, and uses rational analysis to solve all problems. Cannot stop talking once you catch his interest, and doesn’t hide anything from his good friend Meowgiko.

6. Mia Kettica
Age 17 \ October 10th \ 156cm
A buddy Shama met while acting at Caffarno. The two of them are in sync like Twin Spirits; she is important to Shama. Made a promise with Shama to climb Terasyr, the Tree of Life together. Mia and Shama end up in Vuzahem by fate after the troupe was invaded by ichthyopagion.

7. Rui
Age 18 \ June 15th \ 162cm \ B82 W52 H83
One of Uzato’s most trusted Priests. Takes care of many Sacred Temple arrangements. Has a unique gift, able to detect all spirits. Was originally sought as an Uzato Star Ark Priestess but in the end Wanin’s younger sister Naire got the nod. Has a special place in her heart for Welly and has a younger sister working part time at Muscles Bar.

8. Varoussa
Leader of the secret organization in Vuzahem. Honorable and cold, no one dares look her straight in the eye. Shama calls her Mother, but is not her birth mother. She expects good things to come for Shama.

9. Korrud
February 29 \ 165cm \ B83 W50 H84
A traveler from Nassan taking shelter at the Pekt Tavern. Goes out at night and comes back tired during the day to sleep in. Always has a evil grin while asking others if they fancy a game of Quent, a card game she uses to seek her fortune that day.

10. Ahdurio
February 11th \ 183cm
Personal bodyguard to Yaza’s Deadly Navy Captain. Cold blooded, silent and solitary personality gives the impression he’ll be easy to get along with. Does not have the typical Yaza male “cunning” but finds interest in acting and music.

11. Panad Robus
Age 32 \ December 9th \ 187cm
Nield Wharf’s weapon-forging king, also known as The Furnace. Famous throughout Uzato, a humorous, decisive, and experienced hunter. From creatures and monsters in the forest to women, all are his prey.

12. Wuphaka
Age 27 \ November 14th \ 172cm \ B88 W60 H90
A woman who is as respected as Panad. Stunning looks, as courageous as her male counterparts, and master of archery. Is an experienced hunter and usually only takes orders from Uzato elders.

13. Haba
Age 40 \ May 8th \ 198cm
Owner of Uzato’s Pekt Tavern, also known as Ale Boss Haba. Used to be Uzato’s most fierce warrior. Opened the bar for business after settling down with Nanaca. A very good cook, his generous personality brings in a lot of customers. Every Forest Keeper and foreigner loves to come here to have a drink and take a hot bath. 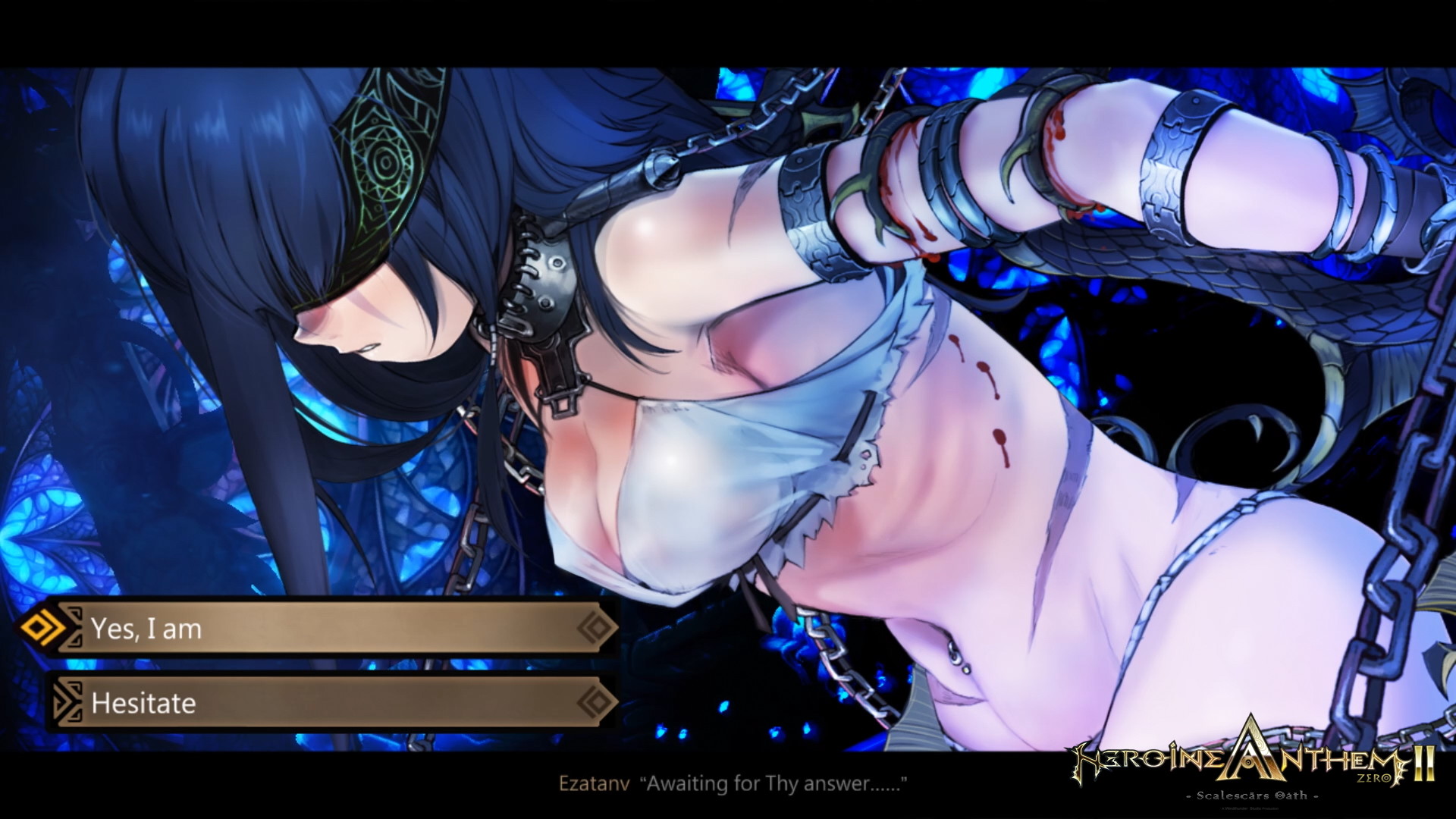 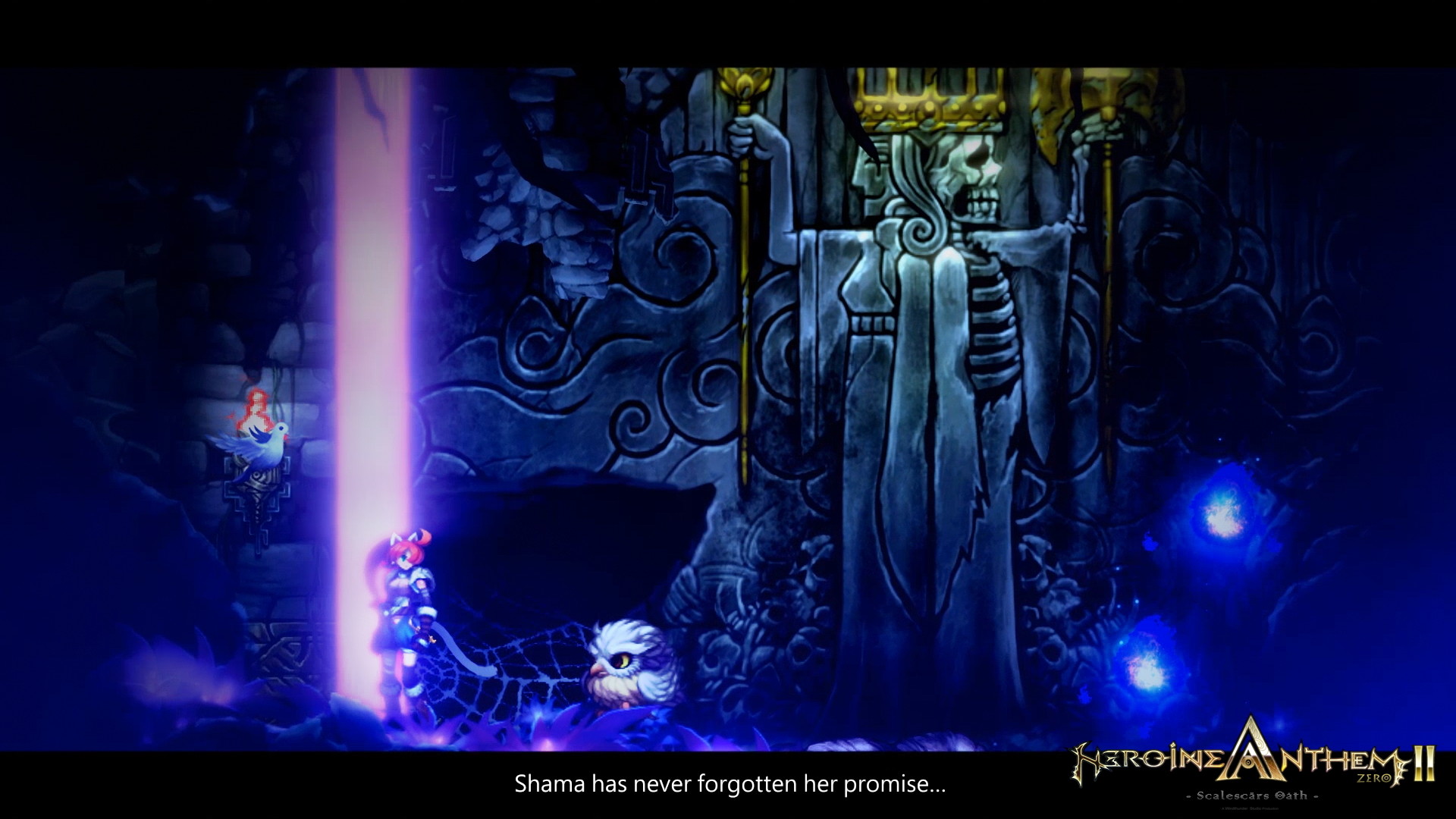 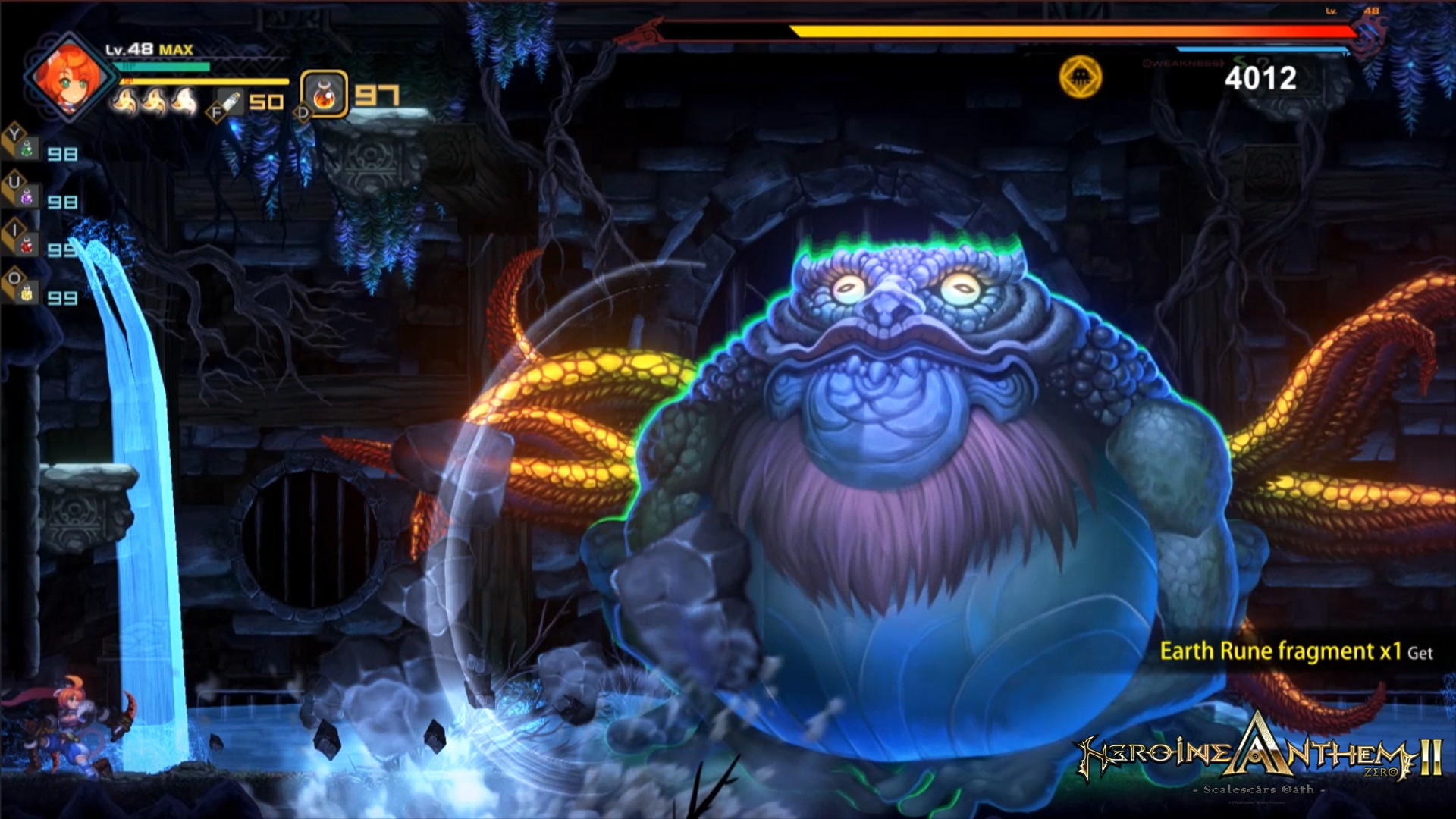 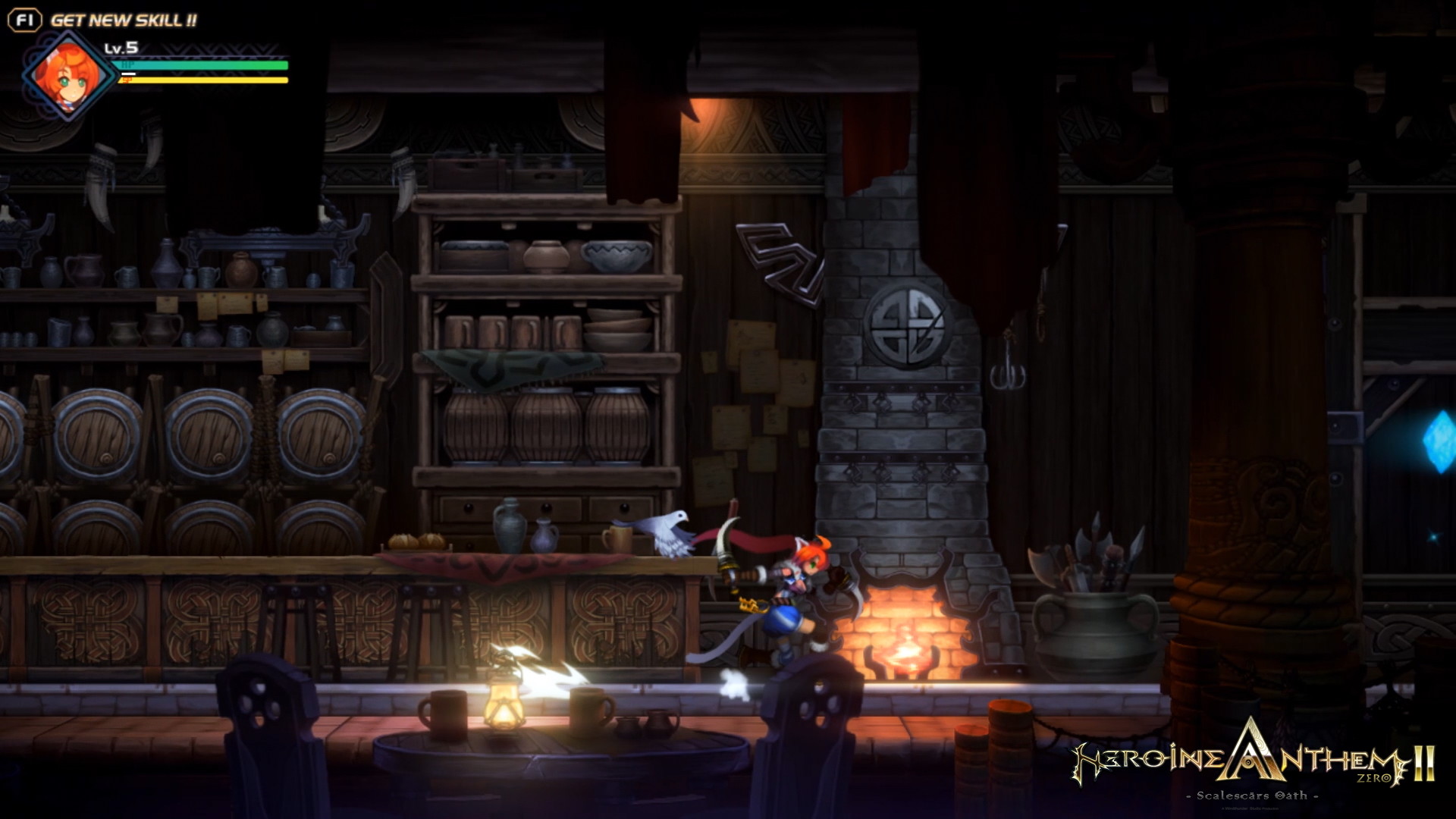 LIST OF ALL UPDATES FOR - Heroine Anthem Zero 2 Scalescars Oath -