With the Ideology expansion, each person in the game gets a belief system.

As you grow powerful, you’ll hunt for the venerated relics of your belief system in new multi-part quests. Penetrate ancient complexes full of diverse threats. Infiltrate wary tribal villages and hack downed spacedrones while holding off other treasure-hunters. Find the relic in its ancient temple and bring it back to your reliquary to attract wealthy pilgrims to your colony and help you convert even more people to your beliefs.

And when you’re successful and secure, you can seek transcendence beyond reality in the new, epic archonexus endgame.

Each belief system is built around a collection of 1-4 core memes, where each meme represents a core idea in the belief system. By combining memes and changing the details of how they are expressed, you can create a near-infinite variety of different belief systems.

Each meme can give rise to a variety of different precepts. Each precept is a specific rule or guideline which affects a specific behavior or preference. The same meme won’t always imply the same precepts – if you want fine control, you can edit and randomize precepts exactly the way you like. Some precepts relate to issues like:

Belief systems each have an underlying structure. These don’t have gameplay effects, but they give variety to how different belief systems look and feel, and the narratives the game generates for them:

People can convert each other to new beliefs. You can assign wardens to convert prisoners, or use the special abilities of your moral guide.

People will also spontaneously try to convert those around them. Those with proselytizing beliefs will do this much more intensely – which can lead to conflict.

Depending on traits, some people are much easier to convert than others.

You can bring everyone in your colony to one belief system, or try to keep a diversity of beliefs to capture the benefits of all of them.

Make use of your favourite colonists’ strengths and skills by assigning them formal social roles. Each belief system defines special roles that believers can take on.

Each belief system defines a collection of unique rituals. These player-controlled events are special gatherings that have a variety of impacts depending on how they are carried out. For example, a wild party in a massive dance hall with giant speakers may attract new recruits or lead to the discovery of an ancient complex full of loot. On the other hand, if you throw a party in a field with no music at all, you might not get the same benefits.

A unique type of tree called the Gauranlen tree will occasionally sprout near your colony. These majestic orange trees have a symbiotic relationship with small creatures called dryads. The tree supports the dryads, and in return the dryads protect the tree. Each tree has a few dryads attached to it.

A colonist can connect with a tree in a special ceremony. By pruning the tree over time, the colonist can strengthen the connection and gain the ability to influence its dryads.

Under your influence, dryads can specialize into different castes:

Beliefs matter. If your colonists venerate the trees, they can connect with Gauranlen trees more effectively and influence the dryads more efficiently. Only those who truly respect the trees can control their reproduction. With time, such a tree-connector colony can build an economy and an army from its Gauranlen orchard and the cute, useful, fearsome dryads.

Every belief system holds some special objects as relics. It might be an ancient sword, a skull, a piece of armor, or anything else. Embark on multi-part quests to find and collect the relics that you believe in.

Hunting a relic involves several kinds of quests to find the relic:

Once you’ve found the ancient temple that holds the relic, you can go there and grab it in a daring raid as you evade and defeat a variety of security systems. Take it home and install it in a reliquary. The relic will help you turn others to your beliefs, and also attract pilgrims who will bring gifts.

Ideology also adds some new quests not related to the relics.

Ancient complex loot quests see you raiding loot-filled ancient complexes, either in a shuttle or by traveling in a caravan. These ancient complexes aren’t about finding a relic – just about getting rich. Complexes are procedurally-generated and contain a wide variety of threats. The threats are designed to interact with each other and even be useful – You can intentionally wake sleeping ancient soldiers to help fight pirates who followed you to the complex, or ignite an ancient fuel node to burn out giant insects nesting in the next room. It can get pretty crazy – this is RimWorld, after all.

New temporary encampments will set up near your colony. These small communities are lightly-defended and often not associated with any larger faction, making them good targets if you want to become a raider yourself. Beliefs matter – If your beliefs are aggressive, your colonists may even demand this kind of attack be carried out regularly to satisfy their need for dominance. The encampments vary from farms to logging sites, mines, and hunting lodges, each with different kinds of defenders and loot.

Groups of beggars will arrive and ask for aid. Help them, and they might reward you later. You can also choose to betray them and enslave them, recruit them, sell them, or anything else. Beliefs matter – if your beliefs are charitable, your colonists will be especially happy when you take care of the needy travelers.

Many of the buildings are used to support rituals. These include:

Each belief system is associated with different aesthetic styles. Styles affect how many things look – rituals, furniture, floors, apparel, and art. Your colonists will enjoy being around things that match the styles of their belief system, and some may reject styles of other beliefs.

One belief system can mix-and-match several of these together. Make the morbid pirates or techno-Buddhists you dream of.

Styles affect apparel in many ways. Animalist believers may shape their recon armor helmets as terrifying animal faces. Morbid death-worshippers will use skull helmets. Spikecore pirates will wear dusters with spiked shoulders. There are many, many visual variations, so every colony will dress different.

Styles also affect the artwork your colony produces. Statues will display the iconography of their creators’ belief systems.

Some styles also come with specific floors including:

Beyond styles, belief systems can make people want to wear specific items of apparel. Some of these can be specific to certain social roles as well – a priest or moral leader may need to wear a special hat or robe.

Colonists also want new tattoos and beards and hairstyles related to their beliefs. They can visit a styling station to recolor garments using dyes harvested from the new tinctoria crop, change tattoos, or restyle their beard and hair.

You can enslave prisoners or purchase slaves from traders. Slaves will work on most tasks like colonists, at the cost of reduced work speed.

Every belief system has an attitude towards slavery – some find the practice abhorrent, while others accept and even demand slaves as part of their beliefs.

You can arm your slaves and command them directly in combat. But watch out – slaves will rebel if they get the opportunity or they are not sufficiently suppressed. Your wardens can suppress slaves by periodically threatening them. You can use structures like terror statues and gibbet cages to passively suppress slaves. You can also make slaves wear special collars and body straps to keep them under control.

As your colony grows wealthy, you’ll have the opportunity to sell the whole thing and start anew with your favorite colonists and animals. In return, you’ll receive a piece of a map that leads to the archonexus – a conduit through which an ancient machine superintelligence is said to affect the physical world.

This quest acts like a partial game reset where you will start over with your selected colonists and animals. You can keep your favorite characters while moving to a new colony in a new place and progressing on an epic quest.

Each new colony appears next to an ancient archotech structure of increasing psychic influence. Study each structure to unlock further pieces of the map. Unlock three pieces, and you can locate the archonexus itself, invoke its power, and transcend physical reality through the mind of the machine god.

Enjoy the endgame credits to a new epic song by Alistair Lindsay.

The game is updated to v1.3.3066. For more information on what is new see the following link.
https://store.steampowered.com/news/?appids=294100 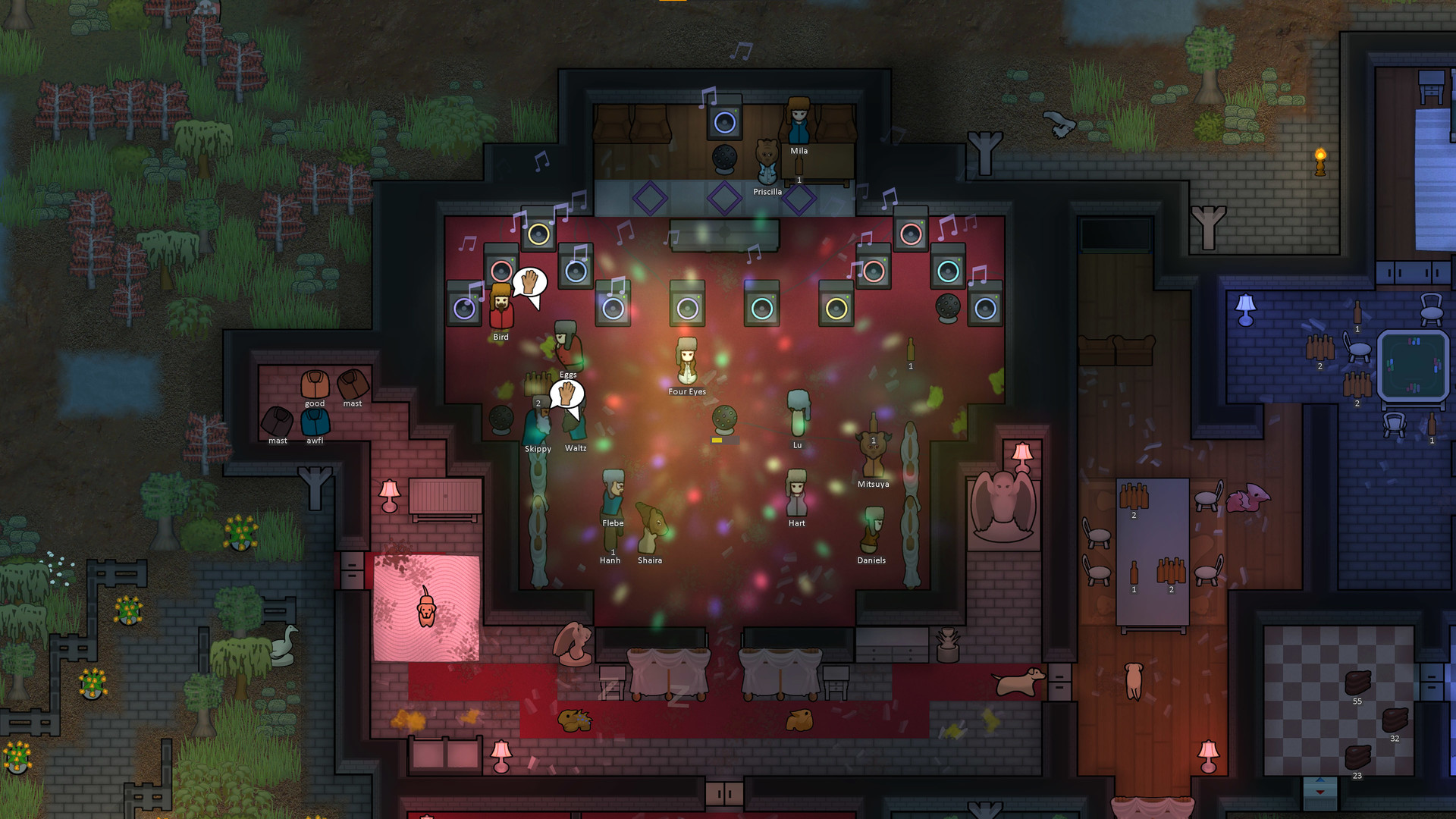 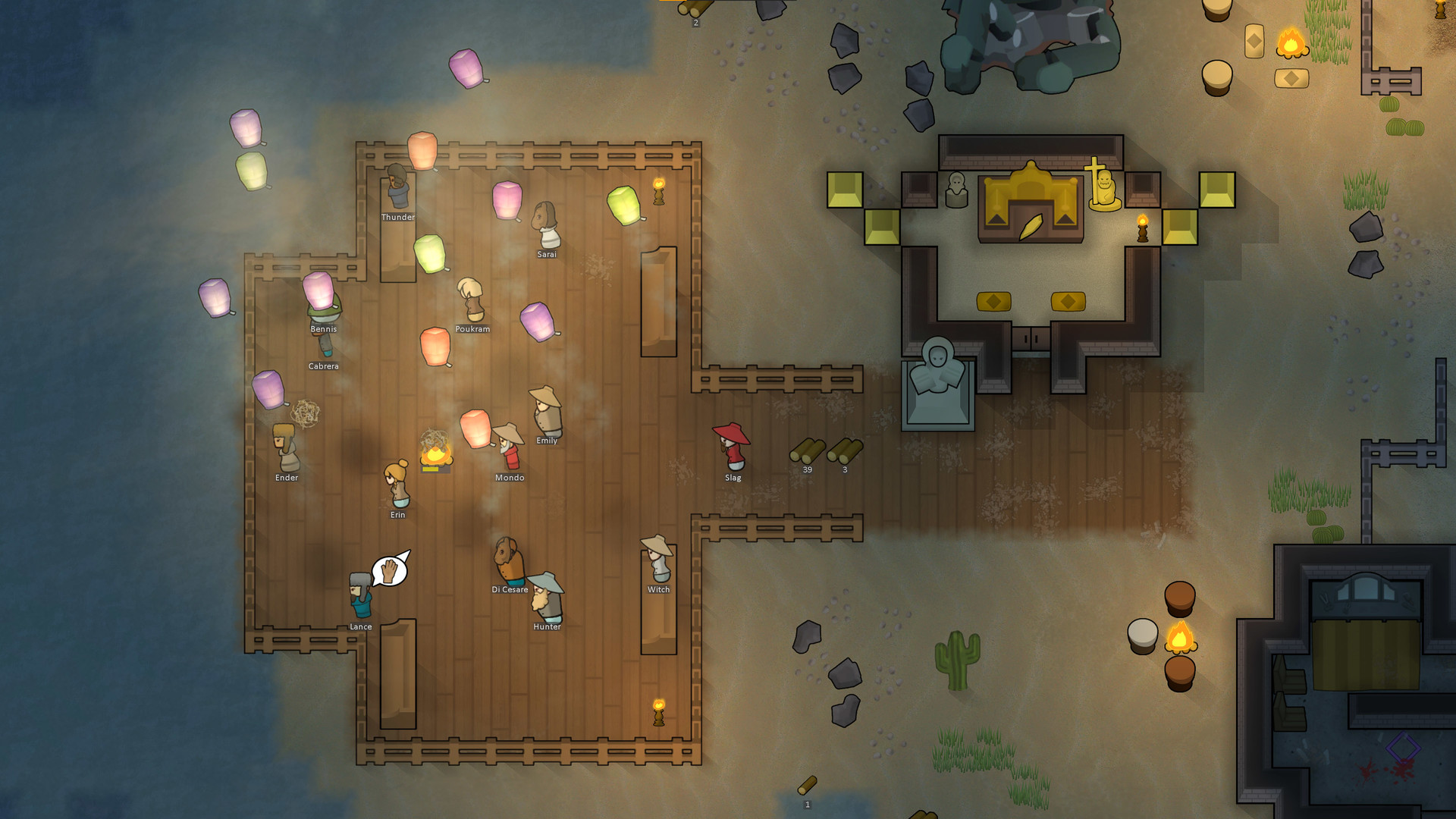 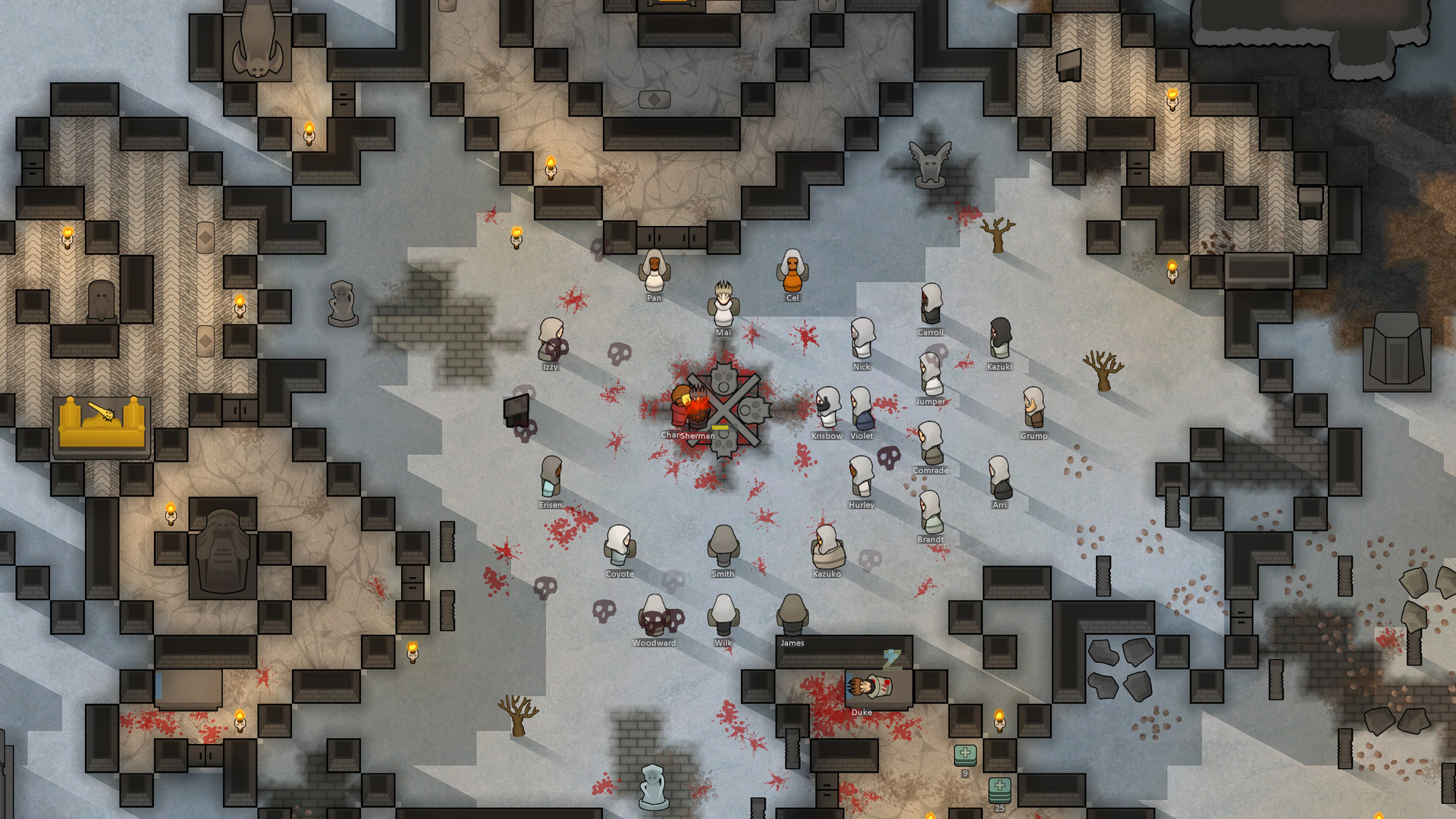 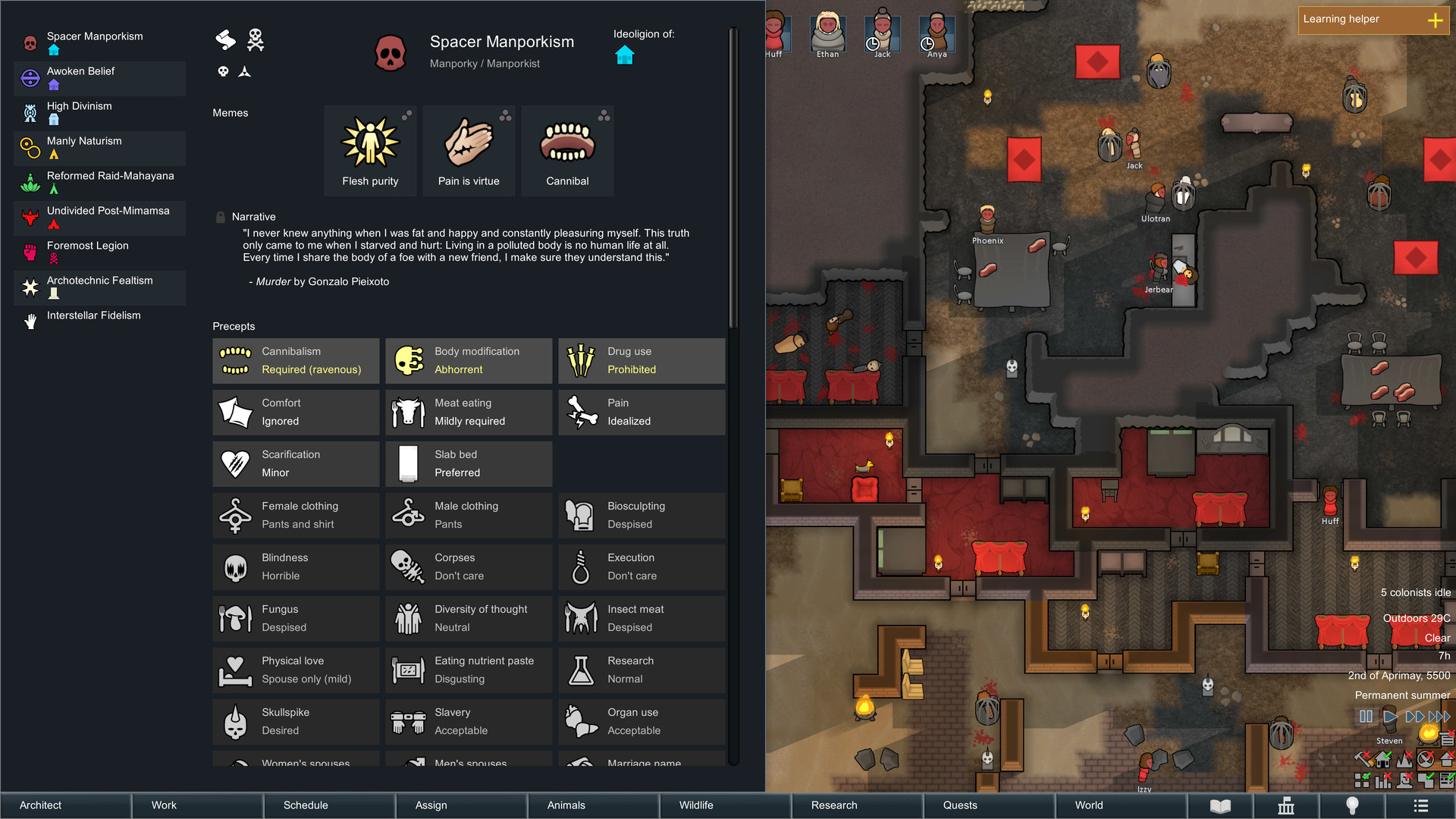